An Abaya is an outer garment worn by women in some parts of the Middle East, particularly Saudi Arabia and the Arabian Gulf region. It is long-sleeved, floor-length, and traditionally black. The abaya is worn over street clothes when a woman leaves her home and is designed to be loose and flowing, hiding the “curves” of the body. The abaya may slip over the head but usually opens in the front, closing with snaps, a zipper, or overlapping layers. The sleeves are formed from the same piece of fabric; they are not stitched on separately. The abaya may be worn with other pieces of Islamic clothing, such as a scarf which covers the hair (hijab or tarha), and perhaps a veil which covers the face ( niqab or shayla).

The Abaya is a simple, loose over garment worn by women particularly in Muslim countries. It is typically worn over everyday house clothes when women wish to leave their homes. It is traditionally black in colour and its loose and flowing design help it to hide the curves of the woman’s body.

Regionally the use of the word abaya may differ slightly in meaning. In some regions/countries abaya is only used to refer to an outerwear robe worn over other things which opens in the front but generally has closures as well. In other regions/countries it is also used to refer to a dress of similar design which does not open in the front. The later is also known in some areas as a Caftan/Kaftan, Thobe, Galabiya/Jalabiya, and a few other coloquial names.

In the Arabian Peninsula, women have been wearing an abaya-type garment for hundreds of years. Before Islam, it was often worn by women of status in urban centers, who did not need to work outdoors. It was later adopted for religious reasons as a sign of modesty and privacy. For many, the abaya represents a proud tradition and deeply-respected culture. In the past, they were often made of wool or silk and came in one flowing size.

Things took a drastic turn with the arrival of Islam, which ordained that women should be covered in modest clothing in order to protect themselves from indecent stares and disrespectful behavior. With the resources available to them, women found it easier to make black robes for themselves. It’s also believed that Abaya first came to be adopted by noble families, which means it always enjoyed royal patronage and its wearer was looked upon with respect.

The abaya covers the whole body except the head, feet, and hands. It can be worn with the niqāb, a face veil covering all but the eyes. Some women also wear long black gloves, so their hands are covered as well. The Indonesian and Malaysian women’s traditional dress kebaya gets its name from the abaya. 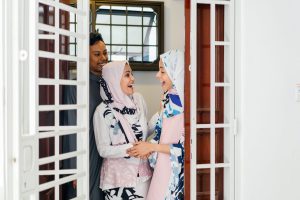 Incorporating our previous love of an all-white-outfit, a chunky trainer style shoe has the ability to transform your occasion-wear white abaya to an eye-catching and effortless daytime look. Because of its plain base, a white abaya gives you the opportunity to accessorise however boldly or simplistically you like.

The abaya Umm Hafsa is a very pretty model especially mastour: abutterfly cut, a width of 1m85, sleeves tightened and a rounded collar with a closure that allows mothers to breastfeed with modesty. You can present yourself more smoothly and stylish. It will bring royalty to your appearance without compromising its functionality. White Abayas are classy and convenient and you can rock any occasion by wearing this Abaya.

When it comes to style, comfort plays an essential role. Jubah dresses are worn by both men and women over the years.  You will experience immense satisfaction by wearing these dresses. Jubah dresses were initially introduced as a traditional garment and it has been gaining appreciation since then. This outfit is of loose- fitting by nature. Maxi dresses have been inspired by Jubah dresses. The greatest thing about this Abaya is that you can wear it in every season. Earlier, these dresses were only preferred by men and women of older age but nowadays, these dresses have become the favourite choice of youth also and thus

Beautiful. Figure accentuating. Gorgeous. Ornate. Simply elegant. We can go on and on about Abayas! They make every woman look feminine, modest, and modish all at the same time. We all have our wardrobes and closets brimming with stylish Abayas which we cherry-pick and reserve for different occasions and purposes. We have some for house parties, some for pilgrimages or trips, some for social parties, while some are just kept for home when we are just being our carefree and casual selves with our folks.

No comments to show.